We all know Yasir Hussain isn’t one to hold back his opinion on any matter whatsoever and always tells it like it is. Recently, he took to his Instagram account to bring attention to an age old debate; should drug testing be done on convicted criminals rather than on innocent animals? 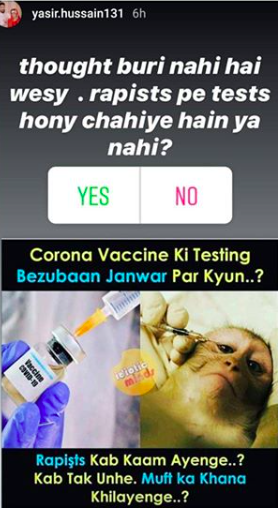 While animal activists all over the world continue to fight relentlessly to put an end to cosmetic and drug testing on animals, majority of testing is still done on animals yanked from the wild to be bred in order to serve one purpose alone; have all kinds of experiments done on them and injections given to them in order to gauge their safety and effectiveness for humans. While all is done in the name of science, does that make it morally acceptable?

Many suggest such tests should be done on convicted criminals, including rapists, but that presents the argument of human rights. So what options are left?

Science has reached a point where scientists are able to replicate human cells, which makes activists hopeful for the future of animal welfare. Here’s hoping an alternative that does not harm any living thing in any capacity is created and put to use sooner rather than later and the suffering of millions of animals in the name of science is put to an end.