Faakhir & Kids Collab with Other Celebrities to Release Quarantine Song

The adorable video highlights the fun banter that most moms and daughters shares, while also sharing some fab cooking tips:

The actress also took to her Instagram to share a preview of the video, and was met with support and love from fans. However, as the saying goes, ‘haters gonna hate’: 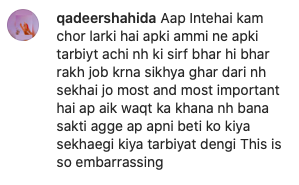 One follower left this scathing comment on Jung’s Instagram, in which she not only questions Sanam’s upbringing, but also equates ‘tarbiyat’ to knowing how to cook! This lady also believes ‘ghar dari’ and cooking is the most important thing when it comes to good upbringing, rather than ‘job karna’ or having a career.

Sanam Jung was quick to shut down this troll’s nonsense: 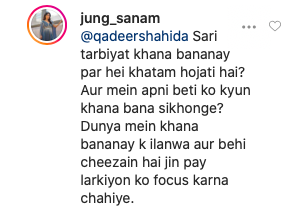 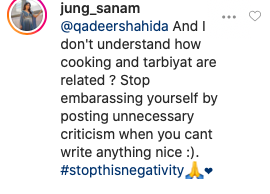 It’s a shame to see women bringing down women. And it’s even much more of a shame that people still exist who believe being at home and knowing how to cook are the perimeters to judge good moral by. Not one’s actions, not one’s words, not the good or bad they do in this world, but whether or not they know how to cook reigns supreme when it comes to judging character.

All we have to say is, leaving hateful comments on ANYONES instagram and badmouthing their mother and upbringing shows your own character and your own lacking upbringing.

If you can’t say anything nice, say nothing.