Ever wondered why you should never meet your heroes? Well, they say that’s because they are sure to disappoint you. Something similar happened to one of Pakistan’s top models, Mushk Kaleem, who not only won the award for Rising Star at Hum Style Awards 2020 but also walked the ramp at Milan Fashion Week last year.

Iman Aly, a name much known for her work in the industry, made some condescending remarks on the “Say it All with Iffat Omar” show. Here’s what she said: “I think it back in the day being intelligent was a part of being a model,” Iman said. “But if you look at the state of it now…” the model went on to laugh. “It’s not the same,” Iffat completed the supermodel’s sentence. “I’m not being elitist, but come on man,” Iman continued. “But it’s just the way they speak, I mean. Their basic general knowledge is just so…”

These comments did not sit well with Mushk Kaleem who took to her Instagram story to call out Iman Aly for her “condescending statement”. 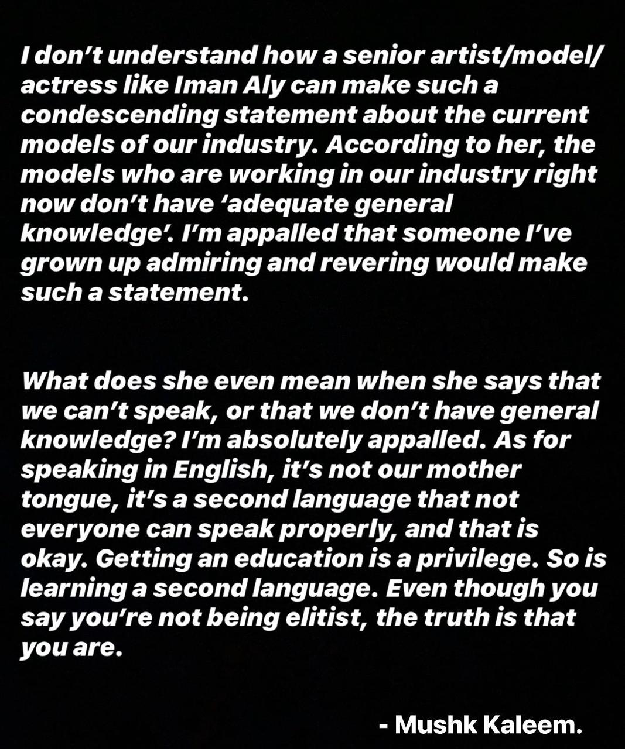 Badar Khalil Relives the Fiasco at the Hum Awards 2015

Mushk was disappointed to hear such statements from a model like Iman Aly who she grew up admiring. Mushk concluded by saying, “Even though you say you are not being elitist, the truth is you are.”