Sexual harassment – a word that has made rounds on our social media now more than ever before. The #MeToo movement has brought to light several victims that have undoubtedly suffered at the hands of the predators around them. However, it has also brought to light the idea of “false accusations”. Be it Umar Khan or Mooroo, the audience and readers remain divided on who’s telling the truth.

Taimoor Salahuddin, a man that has been well admired for his original music, his sense of humour, creative vlogs and to shock a few, for his choice of partner. The day he publically announced his wedding, his fans applauded him for his “greatness” in choosing to marry a woman with a darker skin tone – an act so unimaginable (for a few) yet so basic, that the fact that it needed to be appreciated simply baffled us. This same man, that was once celebrated for simply choosing to marry a talented woman that he loved, is now under fire for a few screenshots that have been posted by Fazeelat Aslam, a model, film-maker and journalist in Los Angeles.

Fazeelat Aslam called out the YouTuber for allegedly harassing her sexually and forcing her into doing an intimate scene with him and calling her unprofessional when she refused. 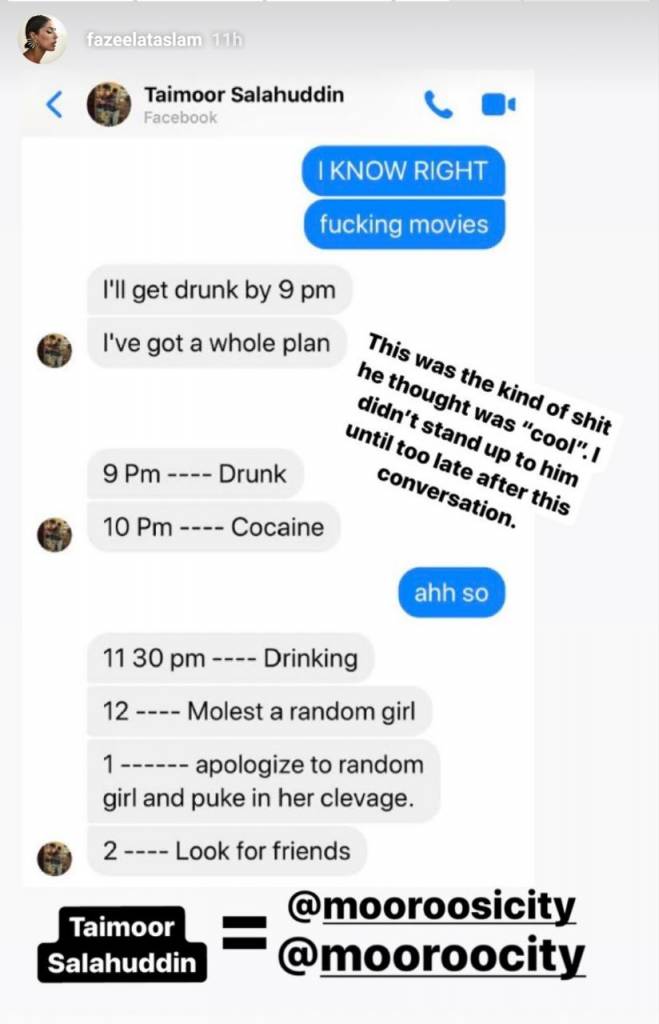 A lot of online spectators and active followers have responded to this with more questions than judgment – “How did he molest her?” and “I have a query. It’s not exactly about this particular case; just a general one. Is it okay to publicly share screenshots of someone’s conversation? If yes, then how can we judge a conversation with just one screenshot?” Another commentator on Soul Bitches said “Same query, I mean I’m all for naming and shaming people who do shit like this and if this guy was saying this stuff about himself, then it’s absolutely despicable. But why does it seem like he’s criticizing the plot of those certain movies that the OP has made a reference to as well? Screenshots shared out of context can be misconstrued and manipulated to paint a certain narrative.”

Then there were also those that called him “a douchebag”, immediately unfollowed him and wondered why his wife has not left him yet. To say the least, the audience remains divided on whether this was a joke between friends that has now been taken out of context or is Mooroo really to blame. For now, Mooroo has not responded to the allegations.

Is it just another case of sexual harassment or one of false allegations. Who do you believe?