Happy 25th Birthday Friends! It feels like we were just introduced to our 6 favourite coffee loving caucasians yesterday, but on the 25th anniversary of everyones favourite comedy, we decided to round up our favourite moments and give everyone a midday LOL.

Joey’s signature pick up line that bagged him numerous dates has been consciously or subconsciously used by everyone at some point in their lives. Not necessarily to pick up women, or men, but just as a friendly way to say ‘ Hey whatsup whats going on?’ but in fewer words.

Our all time favourite Friends line by far, Ross’s PIVOTAL (get it?) comedic moment was the time he was stuck in a stairwell with his brand new sofa and he kept asking Chandler to pivot the angle of the sofa. Even google can’t get over this moment. Type in Rose Gellar in your google search and click on the couch a bunch of times for a laugh. Thank us later!

Janice’s nasally exclamation every time she ran into an unwilling Chandler always makes us laugh. Her entire character was a riot.

The Friends fandom is divided into two sides: The ones who believe Rachel and Ross were on a break when he hooked up with that random girl, and the ones who believe they weren’t and he basically cheated on her. Either way, Ross’s frustrated delivery makes the line all the more iconic.

5.Gum would be perfection.

More often than not when someone offers us a stick of gum we find ourselves using Chandler’s words to accept. Except it’s never a gorgeous super model offering us the gum while we’re stuck in an ATM vestibule. Sigh.

Pheobe’s infamous and very literal jingle about a smelly cat gets stuck in your head for hours and hours and we actually enjoy it.

Rachel’s inaccurate and completely made up position for Chandler’s job is what a lot of us will use to describe our friend’s boring accounting or finance related position. It just works.

Pheobe using lobsters mating for life as a way to describe soulmates is the best. Who knew lobsters were so emotionally invested in their relationships? I hope we all find our lobsters!

Joey confusing moot point with moo point and justifying it as a cow’s opinion is comedic genius.

Unagi is a freshwater eel but don’t tell Ross that. To him, it was a term for a super focused state of mind he learned from some bogus martial arts guy and that whole episode was hilarious.

Monica’s seven. We’re going to keep this one PG. If you know, you just know.

I bet you read that in Ross’s furious voice when he discovered someone at work stole his delicious thanksgiving-leftover-filled sandwich.

Pheobe’s husband had to be this quick on his feet or he wouldn’t stand a chance against her.

Santa costumes ran out so what’s the next best thing according to Ross? An Armadillo!

We still can’t spell palaeontologist without googling the word, so Joey’s way of describing Ross’s profession works just as well. Concise and clear.

17. Sup with the wack playstation sup?

If we were asked to speak like a teenage boy while in our late 20’s, I think we’d be the same as Joey!

18. I’m not so good with the advice, can I interest you in a sarcastic comment?

Of course Pheobe would legally change her name to this. We’d probably go with King, though. (Just kidding)

Yes, the french language is classically sexy, but when you don’t know it and try to speak it? We would all be Joey.

21. Something is wrong with the left phalange!

We hope someone, someday would make up a missing plane part to get us off a plane like Pheobe did for Rachel and Ross. 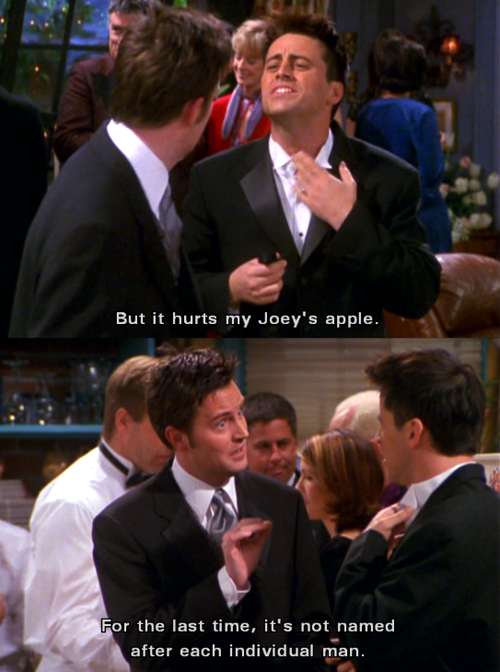 23. Come on Ross, you’re a Palaeontologist, dig a little deeper.

The pun to end all puns.

24. You hung up on the pizza place? I don’t hang up on your friends!

We can totally relate, Joey.

Our favourite five words from the last episode of the final season. Rachel and Ross finally getting back together after he convinces her to get off the plane to Paris.