Mahira Khan and All her Red Hot Looks

Greta Thunberg is a 16 year old Climate change activist from Sweden, who has been raising awareness about the mess we have made out of our beautiful Earth since she was 11.

She shot to fame as the poster-girl for climate change awareness after a picture of her “school strike for climate change” was posted on Facebook by Swedish eco-warrior, Ingmar Rentzhog. Her strike inspired tens of thousands of students from around the world to join her #FridaysforFuture demonstrations – skipping school every Friday to protest climate change. Greta was driven to take action by a record heat wave in northern Europe and forest fires that engulfed acres of Swedish land, all the way up to the Arctic.

The teenager said she is inspired by US civil rights activist Rosa Parks,who refused to give up her seat to a white passenger on a racially segregated bus. In March 2019 she was nominated for the Nobel Peace Prize by three Norwegian MP’s.

The eldest of two girls, Greta’s mother is Swedish opera singer Malena Ernman while her father is actor Svante Thunberg. She has persuaded her parents to go vegan like herself and only travels abroad by train, unlike other fully grown, adult climate change campaigners.

In order to get to the UN climate action summit in August 2019, Greta sailed in a zero carbon yacht to reduce her carbon footprint. How many 16 year olds do you know who would give up a short flight and take a 2 week journey by boat instead?

Greta delivered an impassioned speech at the summit, addressing world leaders and stating they had “stolen my childhood” with their “empty words.”

“People are suffering, people are dying, entire ecosystems are collapsing, we are in the beginning of a mass extinction and all you can talk about is money and the fairy tale of endless economic growth. How dare you?” she asked.

“How dare you continue to look away, and come here saying that you are doing enough, when the politics and solutions needed are still nowhere in sight.”

“The eyes of all future generations are on you. If you choose to fail us, I say we will never forgive you.”

Greta glared at US President Donald Trump who unexpectedly arrived at the summit, only to leave again after 15 minutes.

It’s Leo Season! Here’s Everything You Need To Know About The Leo Sign

Later, Trump took to Twitter and described Greta as a “ happy, young girl looking forward to a bright and wonderful future”, which has caused massive backlash against the President (surprise, surprise). 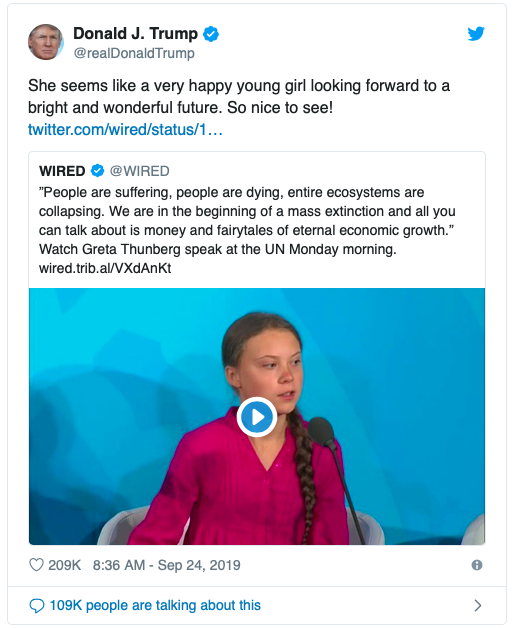 Greta, who has taken a year off school to bring about more action on climate change, will also be speaking at the COP25 climate conference in Chile in December.