Gold Prices Hit an All-Time High in Pakistan at Rs.96,300 per Tola

Yesterday, Sarah Khan took part in a Q&A session with her fans on her Instagram account. Among questions of when her next project is due and thoughts on fellow actors, she was also asked whether or not she identifies as a feminist. Unfortunately for all of womankind, this was her answer: 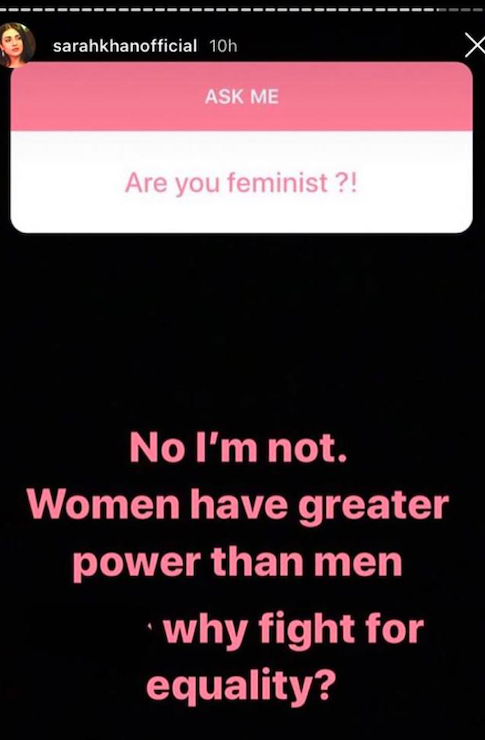 ‘Why fight for equality?’

While this answer may have been well intended, it just goes to show how much our celebrities need to learn about how the privilege they have affects their entire thought process, and how due to their fame and power,  they can spread this incorrect thought process amongst thousands of their followers.

Sarah Khan was not just handed the platform she is on today. Thousands of women in history have fought for women to have equal opportunities as men, which also includes opportunities in the entertainment industries. Not too long ago, actresses like Sarah Khan were not allowed to be on screen at all, and when they were, they were put in a box with only had a handful of roles to choose from, ranging from the roles of charlatans and vixens, to side roles of ONLY stay at home wives who were just good at making gol rotis. Feminists in Pakistan have fought, and fought hard for the few opportunities women of today enjoy, and when somebody as smart and as talented as Sarah Khan rejects the notion of Feminism, she belittles the efforts of all the women today and yesterday who have given their life and souls to make Pakistan better for all womankind.

Feminism isn’t just for women, it’s for all of humankind. The ideology fights first for basic human rights, before anything else. We hope celebrities who also act as role models for millions start educating themselves about what’s going on in the world and in this country before commenting on sensitive and very important subjects like feminism. Or at least learn the basic definition of the word.